Karma is a Sanskrit word, literally meaning "action"; as all actions are effects flowing from preceding causes, and as each effect becomes a cause of future effects, this idea of cause and effect is an essential part of the idea of action, and the word action, or karma, is therefore used for causation, or for the unbroken linked series of causes and effects that make up all human activity. Hence the phrase is sometimes used of an event, "This is my karma," i.e., "This event is the effect of a cause set going by me in the past." No one life is isolated! It is the child of all the lives before it, the parent of all the lives that follow it, in the total aggregate of the lives that make up the continuing existence of the individual . 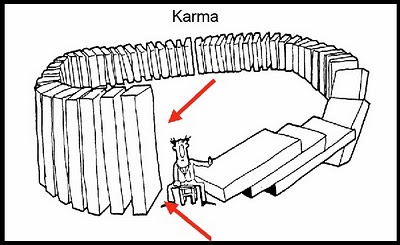 There is no such thing as "chance" or as "accident"; every event is linked to a preceding cause, to a following effect; all thoughts, deeds, circumstances are causally related to the past and will causally influence the future; as our ignorance shrouds from our vision alike the past and the future, events often appear to us to come suddenly from the void, to be "accidental," but this appearance is illusory and is due entirely to our lack of knowledge. Just as the savage, ignorant of the laws of the physical universe, regards physical events as uncaused, and the results of unknown physical laws as "miracles"; so do many, ignorant of moral and mental laws, regard moral and mental events as uncaused, and the results of unknown moral and mental laws as good and bad "luck."

The Law of Cause and Effect

Karma is, then, the law of causation, the law of cause and effect. It was put pointedly by the Christian Initiate, S. Paul: "Be not deceived, God is not mocked: for whatsoever a man soweth that shall he also reap."(Galatians, vi, 7).

We are continually sending out forces on all the planes on which we function; these forces effect our past activities, causing a continual ripple through time to effect the future worlds we inhabited; they bring about certain definite effects both on ourselves and on others, and as these causes radiate forth over the whole field of our activity, we are thus responsible for the results they bring about. As a magnet has its "magnetic field," an area within which all its forces play, larger or smaller according to its strength, so has every man and women a field of influence within which effect the forces they emit, and these forces work in curves that return to their sender, that re-enter the center from which they emerged. 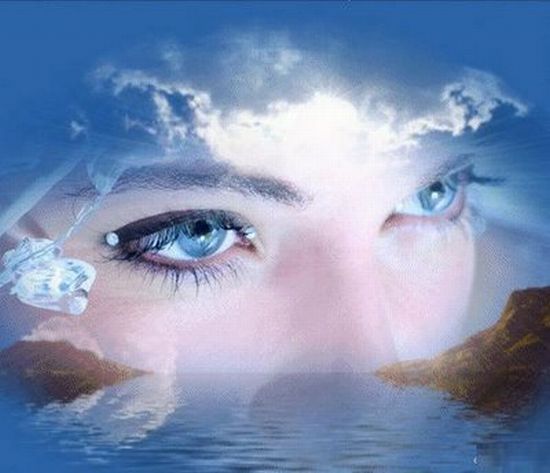 Ripe Karma. Ripe Karma is that which is ready for reaping and which is therefore inevitable. Out of all the karma of the past there is a certain amount which can be exhausted within the limits of a single life; there are some kinds of karma that are so incongruous that they could not be worked out in a single physical body, but would require a very different types of body for their expression. There might be liabilities contracted towards other souls, and all these souls will not be in incarnation at the same time; there is karma that must be worked out in some particular nation or particular social position, while the same soul has other karma that needs an entirely different environment .

All this is the "ripe karma."?This can be sketched out in a horoscope cast by a competent astrologer. In all this the man or women has no power of choice; all is fixed by the choices they have made in the past, and must be discharge to the uttermost farthing the liabilities they have contracted.

The physical, astral and mental bodies or energy fields which the soul takes on for a new life-period are, as we have seen, the direct result of his past, and they form a most important part of this ripe karma. 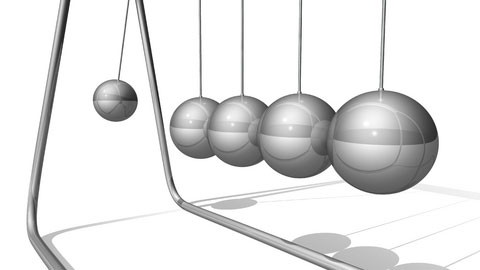 In evitable actions. There is an other kind of ripe karma that is of very serious importance that of inevitable actions. Every action is the final expression of a series of thoughts; to borrow an illustration from chemistry, we obtain a saturated solution of thought by adding thought after thought of the same kind, until another thought or even an impulse, a vibration, from without will produce the solidification of the whole; the action which expresses the thoughts. If we persistently reiterate thoughts of the same kind, say of revenge, we at last reach the point of saturation, and any impulse will solidify these into action and a crime results. Or we may have persistently reiterated thoughts of help to another to the point of saturation, and when the stimulus of opportunity touches us they crystallize out as an act of heroism.

A person may bring over with him some ripe karma of this kind, and the first vibration that touches such a mass of thoughts ready to solidify into action will hurry them without his renewed volition, unconsciously, unto the commission of the act. He or she cannot stop to think; or is in the condition in which the first vibration of the mind causes action; poised on the very point of balancing, the slightest impulse sends them over. Under these circumstances they will marvel at their own commission of some crime, or at their own performance of some sublime act of self-devotion. 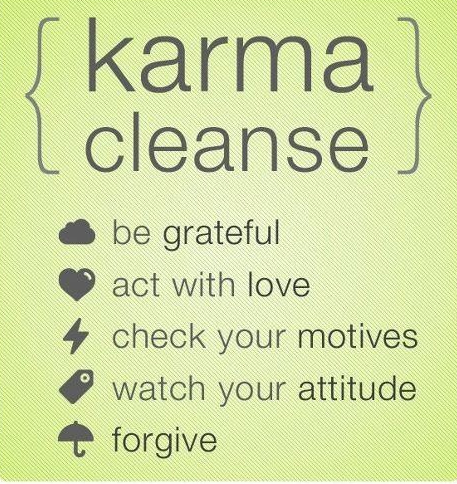 Accumulated Karma. The accumulated karma that shows itself as character is, unlike the ripe, always subject to modifications. It may be said to consist of tendencies, strong or weak, according to the thought-force that has gone to their making, and these can be further strengthened or weakened by fresh streams of thought-force sent to work with or against them. If we find in ourselves tendencies of which we disapprove, we can set ourselves to work to eliminate them; often we fail to withstand a temptation, overborne by the strong outrushing stream of desire, but the longer we can hold out against it, even though we fail in the end, the nearer are we to overcoming it. Every such failure is a step towards success, for the resistance wears away part of the energy, and there is less of it available for the future.

Collective karma. When a group of people is considered karmically, the play of karmic forces upon each as a member of the group introduces a new factor into the karma of the individual. We know that when a number of forces play on a point, the motion of the point is not in the direction of any one of these forces, but in the direction which is the result of their combination. So the karma of a group is the resultant of the interacting forces of the individuals composing it, and all the individuals are carried along in the direction of that resultant. An Ego is drawn by their individual karma into a family, having set up in previous lives ties which closely connect them with some of the other Egos composing it; the family has inherited property from a grandfather who is wealthy; an heir turns up, descended from the grandfather's elder brother, who had been supposed to have died childless, and the wealth passes to him and leaves the father of the family heavily indebted; it is quite possible that our Ego has had no connection in the past with this heir, to whom in past lives the father had contracted some obligation which has resulted in this catastrophe, and yet he is threatened with suffering by his action, being involved with family karma. If, in their own individual past, there was a wrong-doing which can be exhausted by suffering caused by the family karma, he or she is left involved in it; if not, he is by some "unforeseen circumstances" lifted out of it, perchance by some benevolent stranger who feels an impulse to adopt and educate them, the stranger being one who in the past was their debtor. 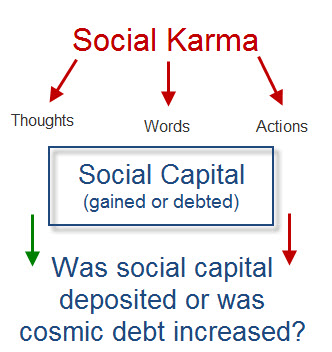 Yet more clearly does this come out, in the working of such things as railway accidents, shipwrecks, floods, cyclones, etc. A train is wrecked, the catastrophe being immediately due to the action of the drivers, the guards, the railway directors, the makers or employees of that line, who thinking themselves wronged, send clustering thoughts of discontent and anger against it as a whole. Those who have in their accumulated karma but not necessarily in their ripe karma the debt of a life suddenly cut short, may be allowed to drift into this accident and pay their debt; another, intending to go by the train, but with no such debt in his past, is "providentially" saved by being late for it.

Collective karma may throw someone into the troubles consequent on their nation going to war, and here again they may discharge debts of their past not necessarily within the ripe karma of their then life. In no case can a person suffer that which they have not deserved, but, if an unforeseen opportunity should arise to discharge a past obligation, it is well to pay it and be rid of it for evermore.